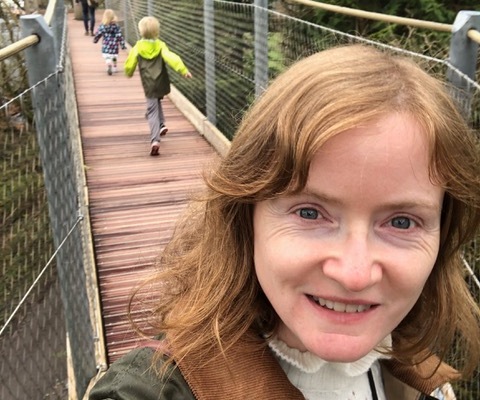 What does it mean to be an immigrant in the United States? We confront thousands of conflicting messages about the immigrant experience every day–many unflattering, untrue or based on stereotype–which makes it all the more important to truly listen to the narratives of our neighbors, friends, coworkers, family and friends from around the world. At Play On Words, we want to highlight untold stories that provoke thought and conversation–stories that reveal human character and diverse backgrounds, experiences and perspectives. That’s why we were so drawn to Mairead Brodie’s essay, “Back Where They Came From,” which compares her grandparents’ journey from Ireland to the United States to her own path, which has most recently landed her in California. We’re delighted to be reading an excerpt of this essay at our New Terrains show at the San Jose Museum of Art on February 24.

Mairead was kind enough to answer a few questions about herself for us.

Tell us about yourself.

I lived in Berlin, Brussels and Edinburgh, working in research communications and technology before moving to the United States in 2012 where I took an enforced child-raising career break due to visa restrictions. Since getting my green card a couple of years ago, I have completed a two-year remote novel writing program at Stanford Continuing Studies, written freelance and kept on with the child-raising, said children now being 7 and 4. I have a masters in international politics and I like to write about the world around me.

What are you working on?

I have a debut novel that I am currently getting ready to send out to agents, a satire about Silicon Valley mores and what happens when they clash in a head-on collision with motherhood.

What inspired you to participate in Play On Words?

I love the theme of New Terrains. One of the goals I have in my work is to address social and economic issues through literature and so the theme of immigration and changing places was inspirational to me. And of course the wonderful Julia played her part in convincing me to submit my work–something I don’t do enough of!

Which writers or performers inspire you?

Name a book or performance that fundamentally affected you.

One of my favorite theater performances was a production of Macbeth by a Polish theater company in the grounds of Edinburgh Castle, in Scotland. The actors were on stilts, used a lot of fire and torchlight in their performance and quite simply gave me a new insight into a very old play, the most Scottish of plays. Recent books I have read that I have enjoyed mix politics with satire or social commentary. One memorable book that really spoke to me was Mohsin Hamid’s Exit West, which addresses the global refugee crisis with a magic realist fairy tale about two lovers separated by war and time, flitting between worlds to find their version of happiness.

Intrigued? Join us on February 24 at the San Jose Museum of Art to hear Mairead’s work performed aloud.